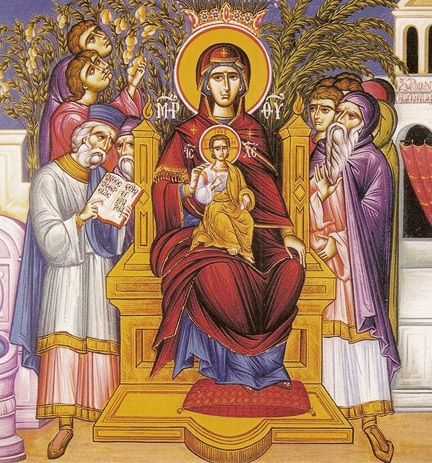 Ad maiorem Matris Gloriam – For the Greater Glory of the Mother

The 6th century Marian devotion, attributed to St. Romanos the Melodist, is one of the greatest marvels of Greek religious poetry, with a richness of imagery that is the despair of any translator. The title “Akathistos” literally means “non-sitting,” because all remain standing while it is sung.

When the enemies attacked Constantinople, the citizens would hold a cross procession on the city walls carrying the Christian sanctities and reading out the Akathist Hymn to the Mother of God. The Akathist hymn was complemented by a new introduction in honor of the miraculous salvation of Constantinople from the conquest of the Persians and Avars, which, as the Byzantines believed, occurred through the intervention of the Theotokos.

Living in these trying times, when we are besieged by many forces of evil, it is hoped that the Akathist Hymn may become the bulwark to withstand, and indeed to overcome these forces.

The Akathistos is the only text that proposes in a prayer form how much the Church of the origins, still all united, has believed and expressed about Mary in its official pronouncements and in its universal consent of faith, it is a very live tradition, which has never ceased in the Orthodox Church since its official acceptance in 626 AD. This devotion unites the Roman Church with the Churches of the East, Christian Orthodox and Catholic alike.

The Akathist Hymn was not strange to the Latin West even though apart from the Eastern Church. Pope Benedict XIV granted on May 4, 1746 an indulgence of 50 days to the Latin and Eastern Rite Roman Catholics, for each recitation of the Hymn.

Fr. Vincent McNabb, a Roman Catholic Priest in London, translated the Hymn into English in 1934. In his forward remarks he stated “No apology is needed for introducing the Akathistos to the Christian West. Indeed the West might well be apologetic about its neglect, or ignorance of such a liturgical and literary masterpiece”.

The Akathist hymn has already been solemnly celebrated on 7 June 1981 in the Patriarchal Basilica of St. Mary Major on the occasion of the 1550th anniversary of the Council of Ephesus; and on 2 February 1982 in Saint Peter’s Basilica in the Vatican in the presence of the Holy Father.

During the liturgical year, Catholics sing the Akathist hymn solemnly on the 5th Saturday of Lent. The Greek Orthodox sing it one part at a time, over the first four Fridays of Lent. On the 5th Saturday of Great Lent (liturgically speaking, beginning Friday evening) in all Orthodox churches, people sing the entire hymn, asking the Mother of God to protect and give them strength so they will be able to finish their Lenten fasting.

The Akathist hymn is also used on many other occasions; its recitation is recommended to the clergy, monks, and faithful alike. It is considered a literary and theological masterpiece presenting, in the form of a prayer, the common and universal faith of the Church of the first century concerning the Virgin Mary.

Prior to Reading an Akathist, Say:

Thou hast created me, O Lord, have mercy on me. (Bow)

Countless times have I sinned, O Lord, forgive me. (Bow)

My most holy Lady Theotokos, save me, a sinner. (Bow)

O Angel, my holy Guardian, protect me from all evil. (Bow)

Holy Apostle (or Martyr, or Holy Father) Name pray to God for me. (Bow)

Below is just a sampling of the Akathistos Hymn, we found most beautifully chanted in French and Russian, as well as English text and music for the most famous hymn to the Mother of God.

Akathist Hymn to the Blessed Virgin Mary in French:

Akathist Hymn to the Blessed Virgin Mary in Russian:

Before this icon, Vsetsaritsa – Most-Holy Queen of All, people pray to banish evil from earth, cure cancer, and make the paralyzed walk again.

Akathist Hymn to the Blessed Virgin Mary Text and Music:

The Akathistos Hymn: Ode In Honour Of The Holy Immaculate Most Blessed Glorious Lady Mother Of God And Ever Virgin Mary – Weitten On The Occasion Of The Deliverance Of Constantinople From The Barbarians A.D. 626
McNabb, Fr Vincent, Blackfriars Publications, Oxford, 1947